Here’s a building that I was sketching in the historic Georgetown neighborhood of Washington, DC. I was sketching this the way I’d been doing all of my lunchtime sketches up to this point; straight from pen to paper; no pencils and no erasers, just skill and visual analyzation. Of course, Georgetown has some pretty complex structures, and this one got the better of me. After rendering the window on the left much larger than the one on the right, I had just gotten it too wrong to continue. Not a big loss; it’s only a four dollar sketchbook, and I wasn’t too excited about the building to begin with. Yet, it was a sign that I needed to up my “urban sketching” game, and start bringing in some quick pre-pencil sketching prior to laying down ink.

Lot’s of client and project work coming up in the next two weeks; see you all in February, and don’t forget to start following the 2015 pro cycling season, which begins at the end of January at the Santos Tour Down Under in Australia and the Tour de San Luis in Argentina. 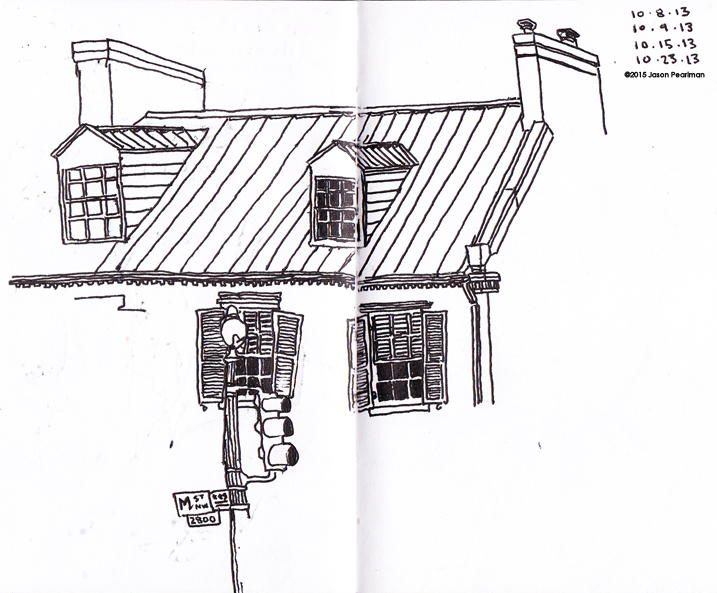 Washington DC is not generally known as a fashionable city, but the high-level government and legal jobs here, as well as the spotlight socialites, do demand sophistication in wardrobe. When Washingtonians get fashion right, it’s an impressive sight, but when they get it wrong, it’s usually a disaster, and nobody gets it wrong more than the Georgetowners. Granted, Georgetowners are rather nice people, but the moneyed-up and tony neighborhood, home to lobbyists, pundits, and societal elites, has a strange penchant for matching the likes of plaid golf shorts to buttoned-up shirts, pink embellishments, and casual footwear like boat shoes and flip-flops. I saw one such specimen, whom had obviously escaped the wilds of Georgetown, on the prowl in the slightly hipper West End/DuPont Cirlce area, and I just had to draw him.